Hi there, welcome back to Value Hearing's YouTube channel.

So it's the Starkey Table Mic that I’d like to talk about. It only came out a few months ago and it's not completely unique to the industry at all, but it is new for Starkey and it's really, really quite exciting as an audiologist to have yet another accessory that we can offer.

I would love to tell you that everyone that comes in to see us in the clinic will walk away with hearing aids that will allow them to hear as well as someone with normal hearing or even better. Unfortunately this is not the case.

The technology has improved a lot so more and more people are getting closer and closer to normal hearing functioning, but there will always, unfortunately, be some people where hearing aids are just not enough to allow them to understand speech in very noisy situations, or when they're trying to communicate with someone from a significant distance, or if they're somewhere where there's a lot of reverberation. 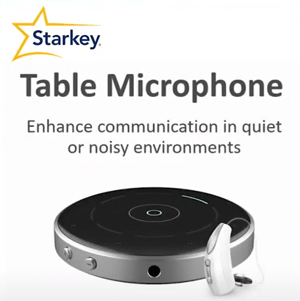 So what can we do?

Well, we generally will fit the hearing aids as well as we can. We will counsel clients on their expectations, but as audiologists we also have to consider what other technology is on the market to help these people and there is actually quite a lot of choice.

So the Starkey Table Mic is one fantastic example. So essentially imagine it as an extra microphone, or in fact it's actually eight microphones. You've got your two hearing aids that will help you hear around you, and this is something that you're going to put in the middle of, for example, a noisy restaurant table. So, you're out with several people having conversations, and you're struggling to hear them. Well this you will put down in the middle.

It has a few modes, but for that kind of situation, we would put it into automatic mode and it's pretty cool, because what happens is it actually looks for the strongest voice for you and it will focus using these eight microphones.

It will beam form and focus on that particular person and reduce the noise that's coming from all the other directions. Then if the direction of the strongest talker was to change, such as someone else at the table was to answer the question that's just been asked, the technology will pick that up and will actually change its beam form straight away, so that you will then hear the next strongest talker. 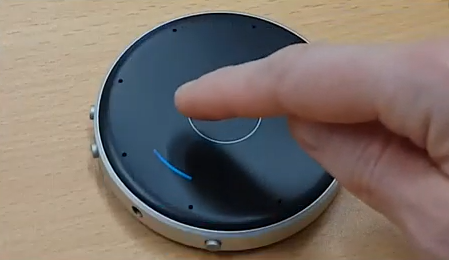 You can generally just let the technology work for you however, if you want, and there are some situations where this will happen, you can actually take over and have some control. That's what they call the ‘manual mode’ so you can actually touch the buttons and choose what direction you want to hear. You can have one to two directions that you want to hear from and the others will be damped, or the noise will be reduced from the other directions.

This is very good. Often clients will report that they're out somewhere and there may be two different conversations happening and it can get exhausting trying to focus on one well. This will help you. You're able to actually say, ‘look Table Mic, I want you to listen to these people here and not these people on the other side of the table’.

The other wonderful option that they've given you, which I really like, is an option for more quiet environments. This is when you can go into what they call ‘surround mode’ so it's essentially an omnidirectional mode where you're hearing from all directions equally. So that'll be great for my clients who want to use this, not necessarily in noisy situations all the time, but they want to use it in a quieter environment such as a work meeting or even maybe the dinner table at home if it's fairly quiet. You would put it in the middle and instead of it trying to roam and look for the strongest voice it will just let you hear all of the directions for you.

The Table Mic as a remote microphone 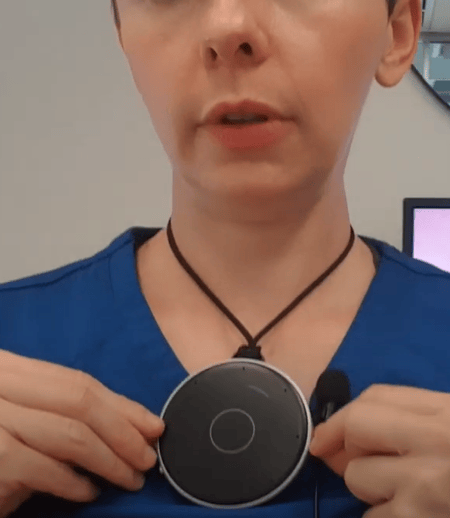 Those are the main modes that you would use as a table microphone but what's really cool with it as well that I like, is that you can actually convert it into a remote microphone as well. Once you lift it up and when it's at an angle, it knows to only pick sound above itself. The reason it does this is so that it can be worn.

It actually comes with its own little neck loop or necklace, as i call it, which has a magnet on it, and then you basically attach it to that magnet.

You'll see that light has lit up. Now we'll pop it on so this is not for you to wear but for your communication partner to wear. The whole point of it is that you will be able to then go outside into a very noisy environment, noisy restaurant, with your partner and or any communication partner and it will work like a third ear. You've got your two ears here again helping you hear around you and then ear number three is right on top of your partner, so it will actually mean that they have direct access to your ears the whole time they're wearing them.

It is wonderful in very, very noisy environments. A lot of my clients love it for going out for dinner and out to cafes and things. They also love it just day-to-day so a lot of my clients will report that they love that when they're in the car with their partner, and their partner is driving or in their passenger seat, that they can hear them directly into their ears.

Others will say just even being able to hear each other at home is wonderful. This will work up to 10 metres distance within reason, obviously big thick walls and electrical cables can interfere a little with that but essentially up to 10 metres so that can allow the partner to communicate from a significant distance at home, but also if they're out shopping together.

I get lots of reports of examples of couples going out to the supermarket and being able to wear this just means it's so much easier for the hearing impaired person to understand what's being said and just leads to less exhaustion.

In a lot of ways it is literally like having your partner's voice directly into your ears so this is a wonderful mode.

Can also work as a TV connector

We do have other technology that works like this. It simply is just a remote microphone but this is quite unique that it's the table microphone and a remote microphone option so the other option as well of course it does come with a cable which will allow you to connect it into any auxiliary output.

So any television that has an auxiliary headphone output, any computer, some phones as well - so when I say phones, I mean places that have landlines for your work, for example or you're working in a call centre - then you do need in most cases a converted device but you can then connect this directly into the work phone system to have the signal going straight into your ears both ears with a much better sound quality.

It’s great for people who work on the phones a lot. We've got plenty of clients in that position but one of the applications that a number of clients have used over the years for something like this is actually, if they travel a lot, you can plug it directly into the entertainment system on the airplane or train so very, very versatile.

The other option is, if you don't want to use auxiliary cable to connect to the TV or the hi-fi system at home you can actually just put the microphone in front of the speaker itself so it works a bit like a remote TV connection.

So, if you had several TVs at home, or you have several homes that you move through, or you're going on holiday, take it with you, and like I said you can just put it in front of the speaker off the tv so super, super flexible and we are very excited to be able to offer this technology.