Value Hearing founder Christo Fourie hosts an informative video series about hearing, hearing aids and accessories. Subscribe to the Value Hearing YouTube channel for get the latest information to help you maximise your hearing.

This video covers the Roger Select iN for the Phonak Marvel. Below the video is the transcript.

The Roger Select iN is designed specifically for the Marvel range of hearing aids by Phonak. The iN basically means it's got the integrated receiver in the Marvel.

With a normal Roger the process of using that with Marvel is quite complex. 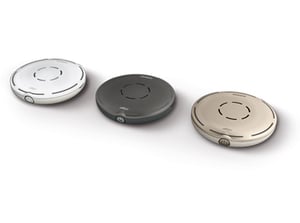 You need two Roger X receivers, which are fairly expensive up to a $1000 each, and you need to transfer those licenses back into each Marvel hearing aid and then you need Roger Select. So, it actually works out a lot more expensive with everything than the Roger Select iN. The Roger Select iN retails for about $1,750.

Where this device is very useful is for people who have difficulty hearing in background noise. With hearing aids, the limitation comes in over distance and noise because when they encounter background noise,  they typically turn on a second microphone, which zooms forward so, where you look, is where you hear the loudest. Anything next to or behind you, is suppressed.

But once the hearing aid zooms forward, the range of pickup is reduced to only about two metres. So if you're hearing in noise is terrible, or you need to hear further than two metres away, you need to use something like the Roger Select.

How the Roger Select works

Once the license of the Roger Select iN has been transferred to each Marvel, all you need to do to operate the Roger Select is to turn it on. As soon as it turns on, it automatically connects to those Marvel hearing aids.

You can use it in three ways.

The first, using a little neck loop, is clipping the Roger Select into the neck loop. Little grooves and little teeth holds it. So once you've got clipped in there, your partner can wear this around their neck, potentially even under thin clothing and their voice is transmitted straight to your hearing aids up to 10 metres away.

Great for walking with a partner in noise. Or if you only have one communication partner in a noisy situation sitting across from you, they can wear this and you'll hear their voice beautifully over a distance.

Similarly at seminars or distance hearing situations if you're in that ten to 15 metre range, you leave this at the podium or around the person speaking's neck, and you'll hear them over distance, perfectly fine, as if they're talking right next to you.

Another way to use the Roger Select, which helps a lot in background noise, is to use it in its table mode. So as soon as you turn the Roger Select horizontally, you'll see all the lights light up.

This has got several microphones, and it's smart enough to know who's talking. So the idea behind this, is you place it on a table and it can detect the speaker and essentially zoom into the person speaking's direction.

But because it's much closer to the source, it will pick up their voice much better than your hearing aids, which might be several meters away, and it will shift that direction depending on who's talking. 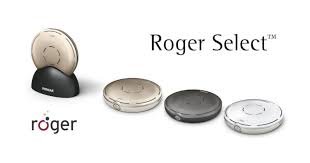 You also have another mode where you can select where you'd like to listen to, so when you tap in the middle. That's all around and that's the default when you first turn it on.

When you're done using it, you can turn it off again. As soon as you turn it off, the Marvels will go back into their normal hearing aid mode again.

This should last between 6 to 8 hours, which is sufficient for most people's days. At night, however, it needs a charge and that's where it gets smart again. The little charger, acts as a TV unit, so it has a power supply, which goes in there, just normal USB C cable, and then it's got an optical out, that plugs into the back of your telly.

So what you need to do at night is simply slot the Roger Select into its little charging dock, and that will give it power, charging it. But while it's charging, it will pick up the TV audio through the optical cable and transmit that to your hearing aids, acting like a television transmitter at the same time.

The next day, you grab it out of its slot on take it off your next function or party, or give it your partner to clip around their neck or alternatively, using the little magnetic clip, which allows it to be worn as a shirt clip or a pocket clip and this will automatically detect the up direction.

So you don't have to worry about pointing the microphone in a specific direction. It also has a drop sensor, so if someone was to drop it, it's not going to blast your ears with a loud bang.

It will, actually, turn off the microphones and you won't hear that noise coming through.

So, a wonderful little device, albeit slightly expensive but can take you from struggling in background noise to hearing beautifully clearly.

If you'd like to try one of these, give us a call and we can arrange for you to try it out and see how it fits in your lifestyle.