The Truth About Invisible Hearing Aids

In this video, Emma discusses the pro's & con's of the invisible-in-canal (IIC) style of hearing aid. While this style is certainly appealing to a lot of people, the reality is that only certain ears and certain hearing losses are best suited for it.

I'm a clinical audiologist and today's video is about IICs and I'm actually going to dish some dirt.

So what exactly is an IIC?

Well, IIC stands for ‘invisible-in-the-canal’ and in theory it looks a bit like this. 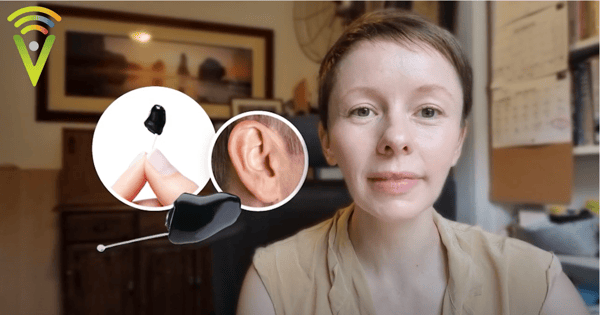 There are other types of custom hearing aids you'll often hear us audiologists talking about.

There's CIC which is ‘completely-in-the-canal’.

It is all in the ear.

They want their hearing aids to be very, very discreet. Some people genuinely need something that sits in the ear. Some people are born without a pinna, or have had an accident and no longer have a pinna -  this part of the ear.

There are other circumstances where perhaps, for example, with doctors they use stethoscopes and they need a hearing aid that sits deep enough in the ear to accommodate the stethoscopes.

There are other options with Bluetooth stethoscopes and whatnot nowadays, but that's not always practical so we do get the demand from our doctors and nurses, and anyone using stethoscopes, that they want hearing aids that sit very deep in the ear.

But the majority of people who ask for IICs are those that want something, like I said, really, really discreet and something truly invisible.

Something that I think should be highlighted is there has been some relatively recent research into the stigma around hearing loss and it was very interesting and eye-opening.

And the people who indicate there's still a stigma are those who have hearing loss themselves so, very, very interesting.

'Dishing the dirt' on IIC limitations

It's truly invisible, it works well and the person is hearing really well, but this can be a very difficult journey.

So, for a lot, and probably for the majority of people that we see, an invisible-in-the-canal hearing aid is simply not an option. This is a limited range of hearing losses that an IIC is really suitable.

The feeling of blocked ears

For those of us with very normal hearing in the low frequencies, or near normal hearing, will find that occlusion can be a real issue. Not always, if you have quite large ear canals, sometimes the hearing aid manufacturers can build the IIC to accommodate a good sized vent to allow sound in and out naturally, but this is not usually the case.

The other type of hearing loss that is not so suitable for IICs, of course, are those of us with more severe hearing losses that need more power. So, for the manufacturer to fit in an amplifier large enough along with all the other components they have to squeeze into the hearing aid, making it invisible, making it sit much deeper in the ear than most other hearing aids is a real challenge.

Are you ears suitable?

So, average to above average ear canal sizes, we may be able to get an IIC that's pretty invisible, if not close to it, however for anyone with a small ear canal, or perhaps with a particularly curvy ear canal, we often find that an IIC is just simply not an option and it ends up looking more like a CIC - ‘completely-in-the-canal’, so a little bit more visible.

This is simply because the components of the hearing aids. they're small but when you put them all together, they still take up space - we've got an amplifier, we've got a microphone, a speaker, and a battery that needs to go in there as well.

And all of those components are little magnets in themselves, so they can't be right next to each other.

There's certain distances that need to be maintained between all the components so the person that's designing this hearing aid is trying really hard to make it invisible for you but then, they're also having to make sure that all these components fit in, and fit in in a way that they're not going to be constantly breaking down.

So, speaking of breakdowns, this is the other issue that we see with IICs. My manager actually likes to say that if you're going to buy an IIC, be prepared that it's going to be in for repair as much as it's in your ear.

Unfortunately, again with IICs being so small, and all the components being squeezed in together, and it living so deep inside your ear, we do see them break down a lot more often.

Look, some people we see get really lucky and they don't break down any more than the behind the ear hearing aids or the larger custom hearing aids, but I would have to say at Value Hearing what we notice is that the majority of people with IICs do need more regular servicing, and some unlucky people really can't have the IICs at all for some reason.

It is a real issue and it's very hard to predict that unfortunately, but it is something that we see a fair bit and these aren't people that are abusing the hearing aids. They often will try really hard to minimize damage to the hearing aids they'll use a dry aid kit every night they wash their hands before they handle their hearing aids they wipe their ears out and they still have problems.

The theory is they have a pH in their ear that means that it's just going to keep destroying the electronics in there.

The other downside to IIC which we as audiologists can often find frustrating for people, is that the technology inside those hearing aids is often limited.

Again, being so small, we can't offer Bluetooth streaming. for example. We can't offer ear-to-ear connections between the hearing aids. And in almost all cases we can't offer any sort of directional microphone technology. There just isn't enough room.

You're also not able to have rechargeable technology offered to you in the ‘invisible-in-the-canal’ hearing aids. Obviously the lithium-ion batteries are, just at this point, much too large for this and it is a real shame not to have Bluetooth streaming available which is that something that's available in almost every other style of hearing aid nowadays.

Of course, if it fits really well, you can probably use earphones or headphones along with your IIC, so there is that option.

All-in-all, there is a reason why we have IICs in the market and there's a reason why they're popular, obviously, but they really have serious limitations.

I think it's really important that people understand that.

I often find that people aren't aware of these limitations and then are really just disappointed when they get their IICs that they do break down so often or they don't have as much control over them as they would like.

Not having things like an app to control them, not having the Bluetooth  streaming, and not having the lithium ion battery option, often bothers people after they've had the hearing aids for a few months, and they realize how great it is to hear so well for the first time.

Often their attitude will actually change and they'll be quite open to having a larger hearing aid, or one that's more visible, in order to hear better or have more functionality.

We definitely do see that a lot of our clients. They will get an IIC for their first hearing aid but their next hearing aid is often not an IIC.

So, another question we get, obviously all the time, is ‘will things improve?’.

I often hear the comment of, ‘I can't believe in this day and age that you don't have invisible-in-the-canal hearing aids that are rechargeable and have Bluetooth.’

And the truth is the technology has come a long long way, but getting all those components into a very tiny human ear is still a challenge.

There is some indication that our industry, and a lot of industries, are looking at the miniaturization of batteries, so perhaps when batteries get much, much smaller - the lithium ion batteries probably been the main one we're hoping for to reduce in size - perhaps the technology will be able to improve for more invisible hearing aids.

However, the human ear is likely not to change anytime soon. I don't think we'll be evolving the human ear much more, and unfortunately it is not the nicest environment for a tiny little hearing aid to sit in all day, every day.

So, unfortunately no matter how much we improve the technology, I can imagine that the number of people, or proportion of people who can comfortably own an IIC, will probably always be quite limited.

I hope that information is useful for some of you and it helps you understand what IICs are and the limitations and some of the benefits of them.