The new Oticon More CROS has been very received by clients who have single-sided deafness.

Today we talk to Sue Gray, Value Hearing’s client liaison about her experience wearing hearing aids and her verdict on the More CROS. 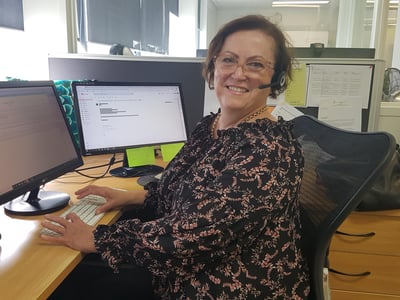 What is your hearing loss story?

I’ve had single-sided deafness all my life. But it took me until I was in my early 30s before I finally got hearing aids.

Before that I struggled with conversation. I persevered with it because I thought I was too young for hearing aids and besides, the only ones around then were bulky, had a tube, and the only colour they came in was beige.

In short, it wasn’t an attractive prospect for a young woman to wear something that made me feel old or thought of as being ‘slow’.

After a while though, I realised I couldn’t go on the way I was. I was missing out on too many conversations. I was also beginning to think about my future and was concerned about cognitive decline that can occur later in life when your brain isn’t getting the sound it needs.

What was it like to wear hearing aids for the first time?

It was overwhelming at first. Everything sounded loud. It took me about two months to get used to wearing hearing aids, but I’m so glad I persevered. I could join in conversations and not feel like I was being left behind.

And there are little things you have to learn like how to remove your glasses without dislodging your hearing aids. I have it down to a fine art now - just lift the glasses first before removing them from your face.

When did you get your first set of CROS hearing aids?

I got my first set of CROS hearing aids 10 years ago. Prior to that, I just had one hearing aid in my ‘good’ ear.

Getting a CROS was life changing. I had surround sound for the first time. I remember putting them in, listening and then I cried!

For the first time in my life I could hear directional sound coming from the dead ear. It was amazing and I’ve never looked back.

I found background noise was more manageable and how important it was to know the direction a sound is coming from.

When I don’t wear my CROS I can’t discern where sounds are coming from and it can get confusing.

What are you looking forward to experiencing with the new Oticon hearing aids?

Being in the industry, I was looking forward to trying them. I never cease to be amazed with each new generation of hearing aid  - they really do get better and better.

I wanted to see if the More CROS hearing aids were clearer in sound and better in conversation.

I was very pleasantly surprised. The sound was more natural and, for the first time, I heard  rain on the windscreen of my car.

A few days after wearing them, I went back to my audiologist for a follow up because I was hearing a persistent humming sound in the background. It turned out it was the air conditioning system. I’d never heard that before!

So yes, I’m very impressed with the new More CROS.

I’d recommend that anyone who has single-sided deafness, especially if their CROS is more than a few years old, to try Oticon and see if it works for you.