The problem with noise needs to be out in the open

Noise in public spaces can make it difficult to fully participate in life.This article looks at:

Scientists are starting to make a big noise about the harmful effects of constant sound, not only on our physical well-being, but also our mental health.

In fact, some experts consider noise pollution to be just as harmful as air pollution.

Noise pollution is often cited as one of the main factors in the reduced quality of life in large, 24-hour cities like New York (where more than 200,000 noise complaints were recorded in 2016). It causes stress, which has its own adverse effects on health.

The effects of noise pollution on your health are real.

And it appears to be getting worse. With the rise of mass transportation and mass media,  the 20th century is considered to be the noisiest century in the history of the world - and things aren’t looking much better for the 21st century either!

What on Earth was that?

Even the planet itself is noisy!

In 2015, a US team of scientists and engineers reported that the loudest sound in some waters now comes from millions of tiny bubbles, which are released by melting glaciers and icebergs. In the fjords of Alaska and Antarctica, the average noise level is now over 100 decibels – louder than any ocean environment recorded before.

And the planet is quite capable of being much louder than that. The loudest sound ever recorded took place on 27 August 1883.

Emanating from the island of Krakatoa, which sits between the islands of Java and Sumatra in Indonesia, the sound could be heard clearly almost 5,000 kilometres (3,100 miles) away and by people across 50 different geological locations around the world.

The sound was registered at around 172 decibels over 160 kilometres away.

To put these sounds in context, here are some everyday sounds you may be familiar with:

Noise and our environment

But it’s not just loud noises which are an issue. People with mild hearing loss report being able to hear perfectly well when it is quiet, but struggle to hold conversations when where is a lot of ambient noise.

Canadian musician and composer R Murray Schaffer - the man credited with coining the term soundscapes - unpacked the issue of living in a modern, technological world in his 1977 book The Soundscape: Our Sonic Environment and the Tuning of the World.

Schafer argues that, over time, humans have moved from hi-fi to lo-fi sound environments, which he calls “soundscapes.” In a hi-fi soundscape, distinct sounds can be heard more clearly due to the low ambient noise level. There is a foreground of sounds and a background: “the sound of a pail on the lip of a well, and the crack of a whip in the distance,” to borrow a phrase from Alain-Fournier’s depiction of the French countryside. With favorable signal-to-noise ratio, we can hear better at farther distances, ideal for hunting, security, and general peacefulness.

Offices and restaurants are two of the most commonly named locations where people report their hearing is most affected.

Modern open plan offices offer a lot of advantages including plenty of natural light which helps boost productivity. Views of the outside world result in workers feeling less stressed. Another benefit is easy collaboration with coworkers.

But it does have its downsides, and the number one is lack of sound privacy.

A 2013 study from the University of Sydney found that a lack of sound privacy was far and away the biggest drain on employee morale. It was named as the most serious aggravation by 60% of the office workers surveyed.

Harvard Business Review has an excellent article on what businesses can do to mitigate the worst effects of an open plan office environment. We take a look at how to manage your hearing loss at work with useful tips to maximise your hearing.

This would not be a good choice of restaurant if speech in noise is an issue. There are no table clothes, the floor is a hard surface and there is little in the way of soft furnishing to absorb sound.

The place where noise appears to be the worse is modern restaurants where high ceilings, hard surfaces and lack of soft furnishings create environments not conducive to intimate conversation.

The Atlantic magazine examines the issue in depth looking restaurant style across the 20th century and came to this conclusion:

And it’s not just in New York. The Australian’s restaurant critic John Leathlan talks about the issue with the ABC.

The problem of noise in public spaces has become so bad that an enterprising man has created an app called SoundPrint to help people find restaurants and venues which are less noisy. 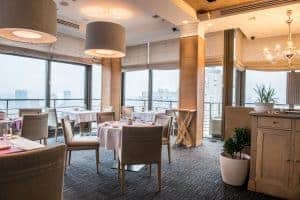 This would be a better choice of restaurant for intimate conversations. The upholstered chairs, carpeted floors, tablecloths and curtains will help absorb sound.

The SoundPrint app is searchable. You can find reviews of restaurants and other locations to see how they compare for noise.

The developers actively invite their users to contribute to the expansion of the database. The app comes with an internal decibel meter. You can measure the venue’s noise level and submit it to the database for other users to see.

The problem with most background noise is that it tends to be dominant in the low pitches. This then drowns out the better part of your hearing making it very hard to understand in noise, as lip reading may only give you about 40% understanding of the speech.

The good news is, there are things you can do to help improve your ability to discern speech in noise.

And in recent years big technological advancements have been made in hearing aids so  hearing in noise is now a more realistic expectation.

The Top 10 Noisiest Cities according to Soundproof Cow.

Value Hearing cares about you and your on-going hearing health. We have articles on other causes of hearing loss here.