Get Your Hearing Tested To Avoid Premature Dementia (updated 2021)

The link between hearing loss and dementia has been well established, but there are things you can do to help reduce cognitive decline.

Dementia and cognitive decline have long been seen as part and parcel of aging. It’s been perceived as unavoidable - like getting wrinkles and going grey.

But as researchers discover more about the brain and how it works, there is an  increasing body of evidence which suggests that this doesn’t have to be the case. 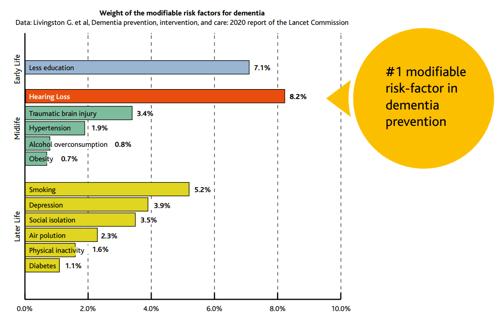 Exciting news in science shows that improved hearing is positively associated with a reduction in cognitive decline and dementia.

This peer-reviewed white paper backs up a 2017 report in the Lancet which identified nine potential risk factors for dementia named the greatest of these risks was hearing loss.

Why Is Hearing Loss Associated With Memory Loss?

Common symptoms of both dementia and hearing loss overlap readily, including confusion during conversation, changes in methods of communicating, difficulty completing everyday tasks, and feelings of fatigue or stress. As a result, hearing loss can be misdiagnosed as dementia or make the symptoms of dementia appear worse.

There are two theories regarding the link between hearing loss and memory loss.

Newcastle University, in the UK, has published research that shows the part of the brain, typically associated with long-term memory for places and events, is also involved in short-term storage and manipulation of auditory information.

That loss was most prevalent in regions of the brain responsible for processing sound and speech, including the superior, middle, and inferior temporal gyri.

Multiple Fields of Study Point To A Common Conclusion

As you can see, many different studies have tested the link between hearing ability and cognitive ability. And all of them show that simply improving hearing creates measurable positive results. 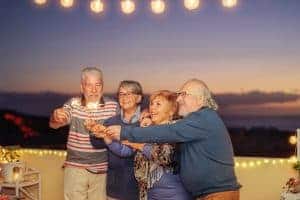 Increased quality of life was reported by people who wore hearing aids.

One of the broadest categories of measurement is Quality of Life.

It is a subjective measure, as the results are based on on how individuals perceive improvement, but it is instructive to note that the family of study participants also noticed improvements in their loved one’s quality of life.

Research conducted by the Department of Audiology and Speech Pathology at the University of Arkansas discovered half the study’s participants reported improvements in their quality of life within just six weeks of wearing hearing aids for the first time.

Study participants were asked to report on their: 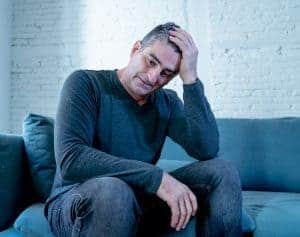 The link between depression and dementia has also been well documented. According to  a 2011 article published by Nature Reviews Neurology, earlier-life depression (or depressive symptoms) has consistently been associated with a more than twofold increase in dementia risk.

The connection with age-related hearing loss, late onset depression and dementia is less well understood, but a study by The National Council on the Aging (NCOA) points the way forward.

The survey of 2,300 hearing impaired adults age 50 and older found that those with untreated hearing loss were more likely to report depression, anxiety, and paranoia and were less likely to participate in organized social activities, compared to those who wear hearing aids.

The survey found that significantly more of the seniors with untreated hearing loss (those who do not wear hearing aids) reported feelings of sadness or depression that lasted two or more weeks during the previous years. Among respondents with more severe hearing loss, 30 percent of non-users of hearing aids reported these sad feelings, compared to 22 percent of hearing aid users.

Hearing aid users reported significant improvements in many areas of their lives, ranging from their relationships at home and sense of independence to their social life and their sex life. In virtually every dimension measured, the families of hearing aid users also noted the improvements but were even more likely than the users to report improvements.

Another study in Canada found a similar result.

Published in the Canadian Journal on Aging in January this year, the report found that the majority (56 per cent) of participants being evaluated for memory and thinking concerns and potential brain disorders had some form of mild to severe hearing loss, but only about 20 percent of individuals used hearing aids. Among the participants, a quarter of them did not show any signs of memory loss due to a brain disorder.

“We commonly see clients who are worried about Alzheimer’s disease because their partner complains that they don’t seem to pay attention, they don’t seem to listen or they don’t remember what is said to them,” says Dr. Susan Vandermorris, one of the study's authors. “Sometimes addressing hearing loss may mitigate or fix what looks like a memory issue. An individual isn’t going to remember something said to them if they didn’t hear it properly.”

Hearing Loss And The Risk Factor For Dementia

Midlife hearing impairment is a risk factor for dementia, according to The Lancet's 2017 report.

The population attributable fraction (PAF, calculated on the basis of the strength of each individual risk factor multiplied by the prevalence of each risk factor) for hearing impairment was determined to be 9%.

So eliminating midlife hearing impairment would theoretically reduce the number of cases of dementia by 9% (assuming that all of the 9% is actually due to a causal impact of hearing loss on risk of dementia, rather than, for example, reflecting a common cause).

A follow up by The Lancet in 2020 answered the question with a resounding, 'yes' with The Lancet authors recommending access to appropriate hearing services, that provides hearing aids and the help to wear the aids.

The Baltimore Longitudinal Study of Aging found that participants with hearing loss showed accelerated atrophy in the whole brain, particularly in the right temporal lobe and another study has shown peripheral hearing impairment is also independently associated with accelerated brain atrophy.

A report released in October 2018 from the University of Manchester, shows cognitive decline is slowed after patient’s hearing and sight are improved. The rate of decline was halved following cataract surgery and was 75% less following the adoption of hearing aids.

Hearing aids helps users to “fill in the blanks”.

The aim of a hearing aid is to improve the clarity of speech in a challenging listening environment.  Hearing aids achieve this by amplifying speech sounds and minimising annoying background sounds through advanced noise reduction systems.

Improving the clarity of speech in noisy environments places less strain upon the brain and allows you to enjoy group conversations with minimal listening effort.

Act Sooner Rather Than Later 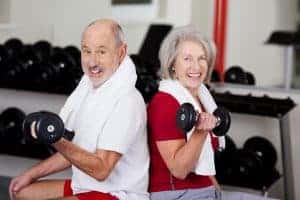 Hearing tests every three years after the age of fifty should be part of your health routine.

The sooner hearing loss is diagnosed, and measures taken to treat it, the better.

So when should you consider having your hearing tested?

Age is one factor.

According the 2017 Health Care Industry Association report on the Social and Economic Cost of Hearing Loss in Australia, most men are expected to have at least mild hearing loss by the age of 65, and most women by age 90.

It is recommended that your hearing is tested each decade up to the age of 50 and every three years thereafter.

But age is not the only factor.

There are a number of signs that you may have hearing loss and they include:

Did you identify with two or more of the above statements? If so, we encourage you to have a professional check your ears and your hearing. It is more than just your listening ability which is at stake.

The lesson is clear: The sooner hearing loss is diagnosed and treated, the better the outcomes for quality of life and cognitive decline.

Value Hearing cares about you and your on-going hearing health. We look at some of the serious effects to your health and ongoing quality of life.